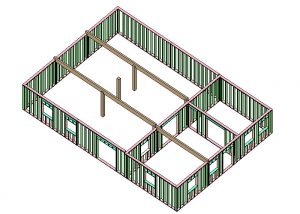 In January 2015 the materials for my new workshop were delivered, I had decided to make the walls and ceiling framework with SLS lumber in 38×184 mm format (2 by 8). For the walls this may be overkill but I wanted to use straw insulation so I needed a large width. I also calculated the span of the ceiling beams (2×8) to always be within 3,5m length, so that the top floor would be sufficiently resistant for storage.

Before I could begin with the framing I had to rebuild the exterior walls and add the corresponding openings for the door and windows. The existing building used to have a large door in one of these intersections and the remaining walls were so worn down that rebuilding was finally easier. 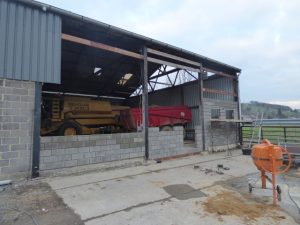 I also used this opportunity to sandblast and repaint the steel beams with anti-rust paint before adding the frame work for the cladding. 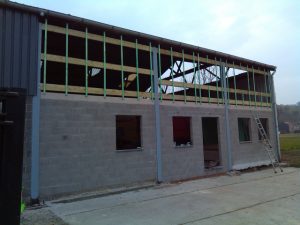 For the cladding I wanted a native wood species that didn’t require any finish, so I chose “Douglas” pine, which is European grown Oregon pine. Without a finish this turns grey over time, we were perhaps not huge fans of this but ultimately the entire building top façade would be covered by this, which would make maintaining such a finished surface a monumental task. 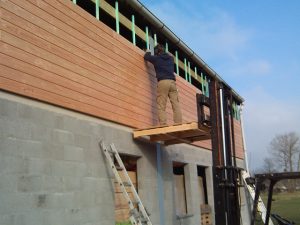 Once the exterior was done i could begin with the interior, since the polished concrete floor was everything but flat I had to start by laying down a flat base with 2×8’s which were treated to resist moisture and attacks from insects and mould. I used a laser level and home made shims from tropical wood scraps to fill in the gaps every 40cm. To limit the height and amount of shims I decided to not make the entire base on the same level, but instead level each room individually according to the highest level in that room, and then adapt the height of the walls so that the tops would all fall on the same level. Doing this saved hundreds of shims. 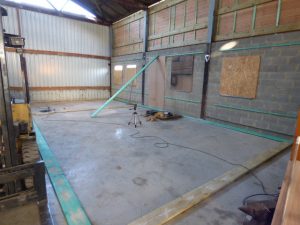 I designed the walls and ceilings to use standard SLS lengths optimally to limit losses, often only having a few cm of loss on each, but I had hundreds to cut so I improvised a mitre saw bench with 5m of table on one side and 4m on the other side. This way I could clamp stop blocks on the table and cut all the beams without having to measure them individually. This greatly sped up production. 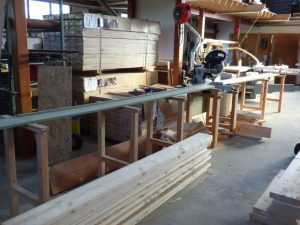 I assembled each individual wall in sections of 5 to 3,5m length flat on the floor nailed together with a framing nailer and 90mm nails, with one beam every 40cm( center on center), covered with 15mm thick OSB II (formadehyde free), and for the walls exposed to the exterior of the building I added a water barrier. Having a forklift made it easy to move them around alone, otherwise you need 4 persons to lift one of these walls. I also added a “diba” water barrier between the walls and the base to stop moisture from going up. 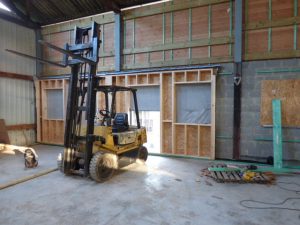 In the first stage of construction I built the assembly room and finishing room in priority, below is a top view of these with the LVL ceiling beam added. This is one is 115x405mm, I had the lumber yard calculate which dimension was needed if I wanted the the top floor to be used for “normal use”. 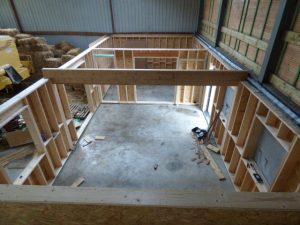 Making this structure took about 3 days with the occasional help of my girlfriend. Doing the ceiling goes slower since you need to add each beam individually and fasten it. The ceiling beams below stick out over the walls by about 80cm toward the open hangar space, this is so I can later add workbenches and storage against that wall on the hangar side while using that overhang for lighting, and also allow me to place things on top with the fork lift without being hindered by these things.

On the bottom of the below image you can still see the remainder of me previous workshop ceiling, which I later dismantled. 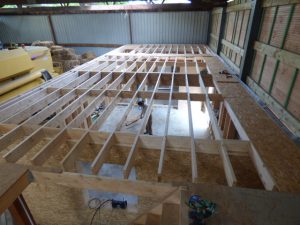 At this stage we had to completely finish the ceiling in order to start building on top. So we stapled a vapour barrier to the bottom. Initially this was incredibly tedious but after a while we got the hang of it and found out it’s easier when first stapling on end and then start in the middle of the opposing end and work from there. 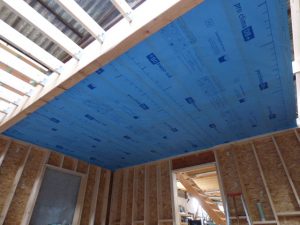 At this stage when the glass arrived I could also add the doors an windows which I had made earlier, as up to then I had to barricade all openings after having an unfortunate night visitor who stole for about 3k of tools… It was also becoming very dark after adding the ceiling so the light was welcomed.

Finally it starting looking like something from the exterior. 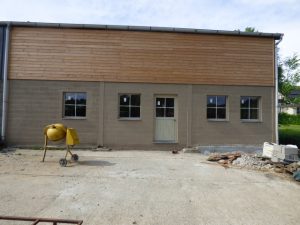 Here I am insulating the ceiling with straw from our farm, on top I add sawdust to fill the gaps and to cover the straw, otherwise the straw sticks out and gets in the way of closing the OSB joints. Even though there will be a room here, I still wanted to insulate the ceiling for noise issues.

Here is the room above, this will initially be our apartment before we start building our house later. I made the assembly room ceiling a bit lower than wished, so that we could walk under the joist beam from the roof without hitting our heads and also to be able to have the windows at a usable height. I placed the ceiling beams for this room in the other direction so that the weight of that ceiling would rest on the side walls below and take pressure away from the LVL beam. 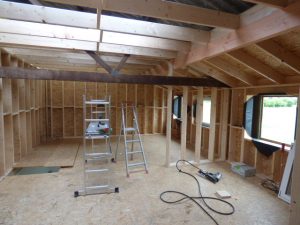 Meanwhile we had also finished the insulation and drywalling of the first part but that will be covered in another separate article.

When that was done I started framing the machine room, this was 2x larger but has no inner walls, only support poles. This was done in a similar way as with the other part, by starting with laying down a flat base first. All these preparations certainly aren’t fun, but necessary to have a good result. 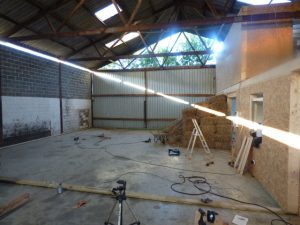 I left the front side open so I could use the forklift to bring in the 11m long LVL beams. these rest in the middle of the room on 200x200mm poles, these are not entirely in the middle of the span but offset by 50cm, in order to have sufficient space for the panel saw. 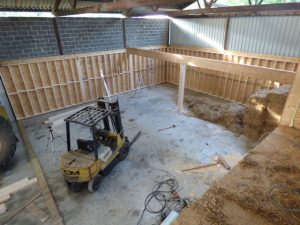 Basic framing done and front wall added, this only took 2 days, the poles in the middle are also laminated in order to avoid cracks and splits. 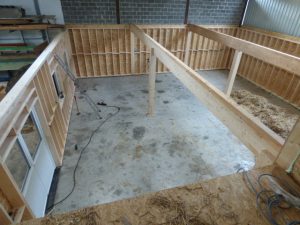 Adding the ceiling beams was one hell of a repetitive task. When they had a bend I made sure it was placed upward. 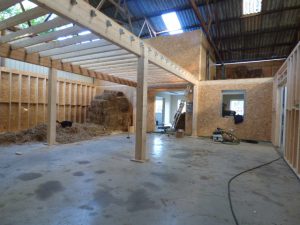 The video below compiles this second part of the framing process, the following steps will be covered in separate articles. I also sell the framework sketchup model of my workshop on this page for a small sum. 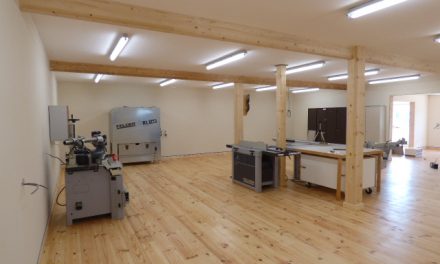 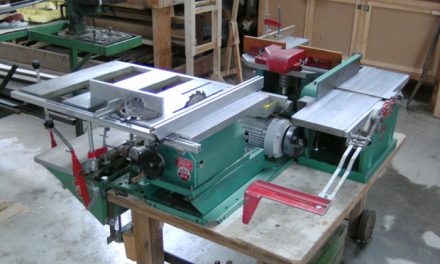