In the summer of 2015 I was contacted by the people of  Inventables to see if I was ok with them sending me an X-carve of my choice entirely for free, in exchange of a video and honest review (good or bad). This was quite a surprise as I never actively looked for these kind of demands, but it seemed honest and also a good opportunity to get a new interesting tool for free… The funny thing is that I had already seen videos of these on youtube before I was contacted and it was the first time that I saw a workshop CNC router that I could see myself using, mainly because the work surface and price seemed decent.

A few weeks later the packages arrived, I opted for the largest version with 800×800 work surface (currently Inventables offers a 1000mm model as well). This was in the middle of the summer while I was not only busy with the harvest on my dad’s farm, but also in the middle of the build of my new workshop. Therefore I had little time to spend on this and it was only a few months later that I was really able to start working on it.

Assembly was done on one lazy Sunday at home, it’s all pretty straightforward and very addictive. Once you start, you can’t stop until it is finished. The step by step guide on the website of Inventables is very well made and all the parts are labelled clearly, all the mistakes I made were because I was going too fast without properly looking at the instructions (who needs plans anyway, right?)

The only real problem I had was that the motor mount was faulty and wouldn’t allow the motor to slide in. Inventables support quickly sent me a new one and I also ordered mounting plates for the DeWalt router because the supplied spindle router (which is apparently not supplied anymore) seemed very weak. 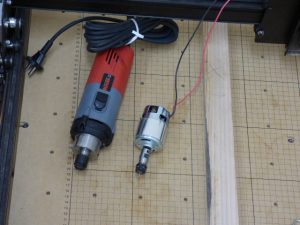 Kress 800W motor next to the supplied motor, what a difference!

First tests showed how indeed the engine they supplied at the time was way too weak and only suited for light and slow carving duties. Therefore I ordered a Kress 800 watts engine that can also take standard 8mm shaft router bits.

To use the X-carve you need an internet connection and a computer, two things I didn’t have in my workshop at the time. So I invested in a laptop PC, which has since become a great addition to my workshop since I can now view my plans and read my mails from the workshop (I completely stopped using my home PC ever since). And internet was finally installed as well since we were moving into the apartment above the workshop and needed internet and tv anyway.

To work with the X-carve you use the online program called “Easel”, which in terms of ergonomics can be compared to Sketchup, overwhelming at first but you very quickly, almost instinctively understand the basics. Over the year that I have been using it, I have seen constant updates that each time offer significant improvements. As soon as you discover something that could be done better, it gets solved by the next time you use it. 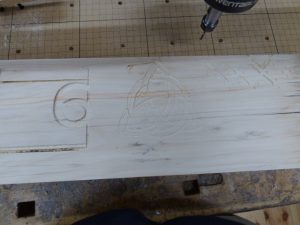 First test with the X-carve

The first test was pretty catastrophic, I used templates from the Easel catalogue to make my first cuts, it started well but the router would start going all over the place, breaking the small router bits. After trying to figure out the cause I discovered the guide wheels of the router unit were too tight which caused the actuator engine to slip, I gave them a bit more play and from there on it worked perfectly.

My first real X-carve project was carving the famous Lord of the rings inscription “one ring to rule them all…” onto the window sills inside our apartment, this was too tall to fit under the X-carve, so I cut out a strip of wood, carved the inscription and glued it back. 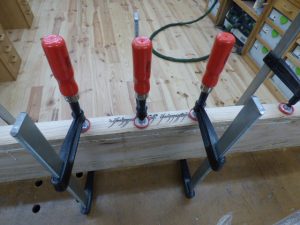 Below is the result, we are both LOTR fans so it’s just great to have and it always sparks conversation. 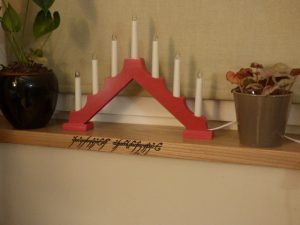 It took me a year and a half to find a project worth while of a video, I used the X-carve on many occasions before but nothing extraordinary, and I didn’t feel confident enough about my abilities to use it properly.

Then came a special demand from a watch maker who wanted to adapt one of my workbenches so it could be used for watch making. This was an ideal project for the X-carve because it required complex and precise jigs. I prefer to work with jigs rather than to have the X-carve work on the work piece itself, because with jigs you can rapidly reproduce the project for another customer. 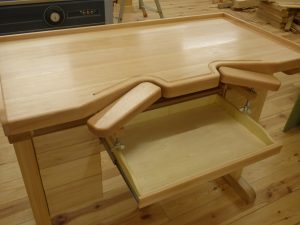 I drew out the elements in Sketchup and simply by using the SVG converter plugin (SVG is the format that Easel can read) I could directly import each part in Easel, lay it out on the work piece and cut it out. In this occasion I chose not to cut through, to spare the X-carve bottom. Other times I place a sacrificial board between both, it depends on the situation.

As you can see the jigs are quite complex and would have been very difficult to make by hand as I did before, these were spot on from the first try.

The X-carve is certainly a handy addition to my workshop and I wouldn’t like to see it go away, it has it’s limitations in terms of work surface, height, sturdiness and capacity in general when compared to “professional” CNC routers, but I can live with those. It’s pretty easy to use, reasonably priced and sufficiently accurate for my demands. Would I have bought one if Inventables hadn’t sent me one? Probably not. Would I have missed out on something? Yes without a doubt.

The only real problems I had were lack of dust collection, size limitation and storage of the controller box, all of these issues have apparently been solved by Inventables on current models.

As a woodworker I couldn’t see myself working without Sketchup to make my plans and calculations, the X-carve actually allows you to transfer anything you draw in sketchup, to your work piece. That alone is just amazing and brings your work into a superior level of accuracy.

Below are a few other projects I made with my X-carve over the past year: 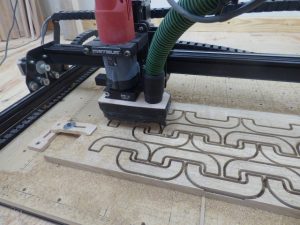 Carving out handles for the furniture I make (I used to make these by hand!) 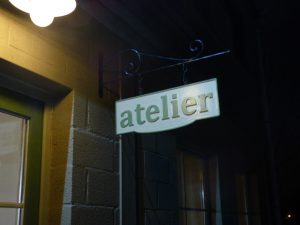 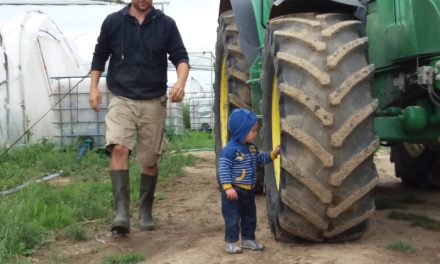