After finishing my new workshop in 2015, I moved in quickly with my previous workbenches and cabinets to start working again for customers. My previous shop was very small, I had a 4x5m room for all my assembly work and workbenches. This time I had a room twice as big but I was stuck with the same small benches and a dire lack of storage options, most of my toolboxes were sitting on the ground against a wall.

I had plans for bigger workbenches and storage cabinets from the day I designed the new workshop, but time was a big problem. The year after finishing the new shop was spent on exterior work, planting hedges, landscaping, paving etc…

It’s only at the end of 2016 that I was able to make time for the workshop again and build what I had originally planned.

Below you can see my new workbench, I was in dire need of more workbench surface so I could streamline production, this allows me to sand on one side and do routing or assembly on the other.

When I am sanding I always place an anti-slip mat on the workbench that I keep in place with rail clamps. This protects the work piece and absorbs vibrations and noise. This mat is long enough to cover the entire workbench, later on I plan on building a roller at the end of the bench to roll it up. Note how the shop vac fits under the bench and the shelf above where you can rest the sander or other tools. 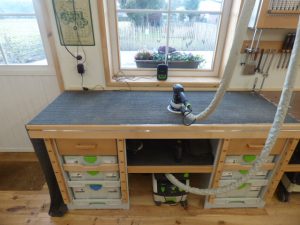 Below you can see the drawers on the sanding end, one serves for storing my most used sand paper by size, and in the other I keep the worn out sanding pads which I cut into 4 and use to sand by hand. I have always done this but never had a dedicated storage option for it, so they would clutter the workbench. 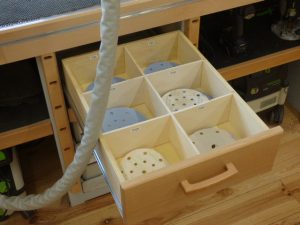 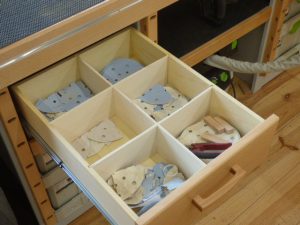 On the other end I do assembly work or power tool operations, the two drawers on that side are dedicated to screws and I turned that mid section into a closed cabinet where I keep my glue buckets and other products.

This way I have all sizes by hand and can see what type I need to order again before I run out. These dividers are made on the table saw with a dado cutter. 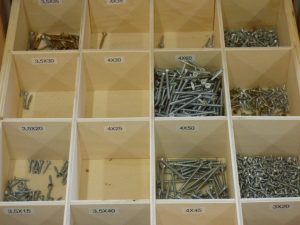 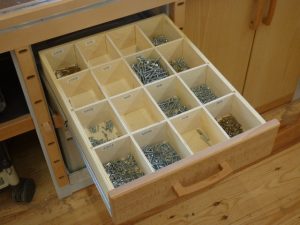 Below you can see the numerous clamping options offered by the holes on the worktop, the rails on top and front of the edge and the perforated legs. Virtually nothing is impossible to clamp. Note the wooden pegs inserted into the front legs that serve as a stop for panels or pieces clamped to the front. 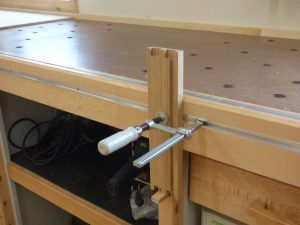 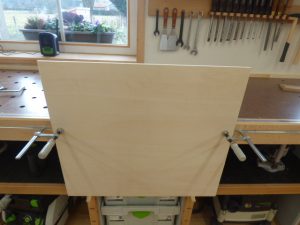 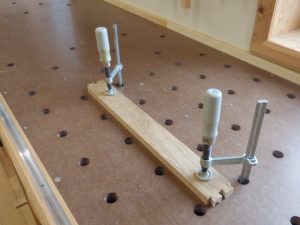 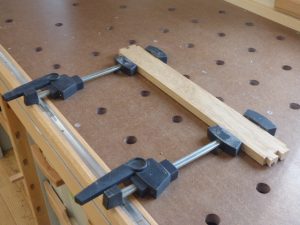 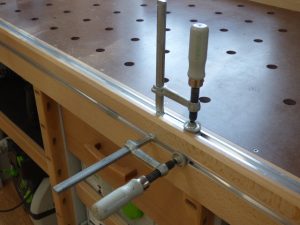 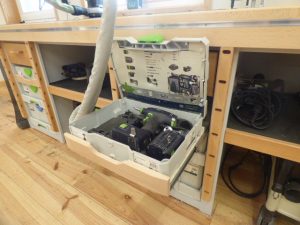 I also designed a little platform that offers a bigger support, some work pieces are too long when placed upright on a workbench, for example when sanding drawer fronts. This was major annoyance in the past as it’s not unusual for me to have dozens of drawers to sand or on whom I must attach handles. 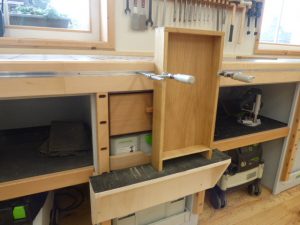 Something I was also missing in my new shop was a tool cabinet above the workbench where I could store all the small hand tools and accessories frequently needed. With this cabinet I have all that within hand reach. 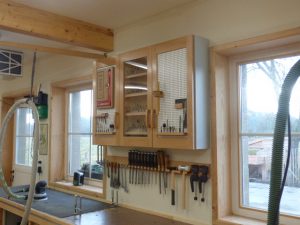 In the centre I keep my most used drill and router bits on little removable shelves that are angled forward, I used the same feature as on my shaper cabinet.

The left and right doors are filled with peg boards, that way I can easily attach tool holder from behind and eventually change them later on without leaving any traces.

I keep the small glue bottles in one end within hand reach. Below the cabinet I made a rack for the different tool I often use, like router wrenches, chisels, hammers or clamps. 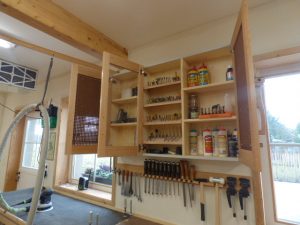 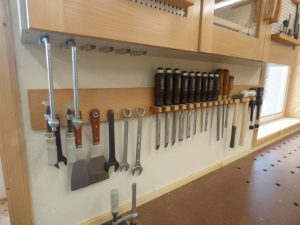 Initially I didn’t know how to intelligently use the corner where the workbench and tall storage cabinets would meet, an actual cabinet in that spot would be hard to use and an open space would be a waste. Thankfully I came up during the final planning with a shelf that I could use to store all the different pieces of the furniture I would be working on. Up to now I used to lay these on the workbench which would often take up the entire bench surface, or I would lay them on the floor which made them prone to being damaged and created a mess anyway. 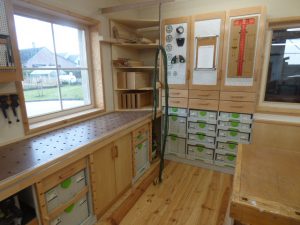 Below you can see a basic plan for this cabinet, since one end is deeper than the other you can store parts according to their length. It hold together with 4mm deep dados

On the other wall of the shop I built cabinets to hold my systainers and store all kinds of hardware and supplies. This design is inspired by existing designs, often based on the “chaos theory” by Guido Henn. The basic design is so perfect that there is basically nothing to improve. My only problem was that the original design had a complex and expensive build process that used a large quantity of panels and expensive hardware. So I designed my own version that uses pretty much half as much panels and basic cheap hardware. 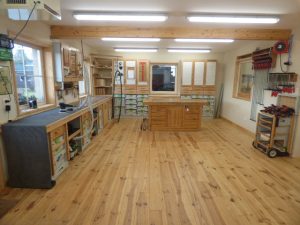 Cabinets on top for storage of sandpaper, screws and all sorts of accessories

Drawers in the middle section for hardware.

And systainers in the bottom section. 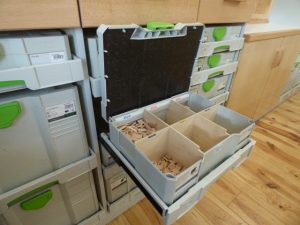 To use the space under the window I built a cabinet where I can store things that are too long for the other cabinets, in this case my Trend dovetail jig or case for the nail gun. 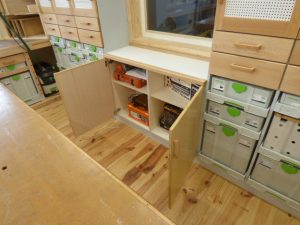 You will have probably noticed that I mostly used the SYS-AZ drawers sold by Festool, I had planned on making my own drawers to keep the budget low, and had already purchased all the slides, but I wanted to make my design and plans compatible with the drawers by Festool. So I simply sent Festool Belgium an email, asking if they could perhaps lend me a few. If not I would have bought a box of 5, but to my surprise they did not only agree, but they sent me 30 drawers I could keep.

Companies have a marketing budget they can spend on such actions, as in this case they will obviously get publicity and views in exchange. But in any case a big thanks to Festool Belgium!

However I still made a homemade drawer for my plans and to fill the last remaining open spots. It helped me discover that the SYS-AZ drawers are in fact much better thought out than I originally thought.

The first thing you notice is the limited height, the SYS-AZ drawers have a thin plastic bottom and so only add a few mm in height to the systainer. The wooden design is de facto 14mm taller, might not seem much but it adds up. With the wooden drawers you can’t place as much systainers in the same space as with the SYS-AZ. Another advantage is that the sides of the SYS-AZ cover the slides, and so prevent dust and other particles from getting stuck in the grease and around the balls. In a workshop I can imagine they will run smooth for much longer. And finally they come with a lock you can install in the 32mm system holes and that locks them in place, it’s not useful in this case but on a rolling workbench or in a vehicle it is a very handy feature. 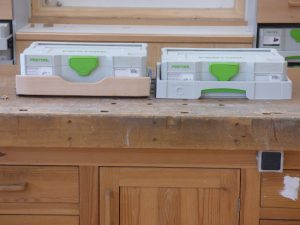 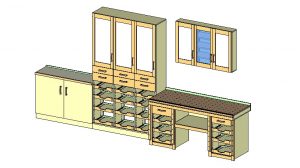 I made plans in English, French and German that detail the construction step by step for each of the pieces shown above, with a material and cut list. It also contains the 3d sketchup model.

The plans are 39 page long .pdf and detail the build of the workbench, storage cabinet, tool cabinet and low cabinet.

For the US market I made an English version where I used imperial sheet goods, note however that the plan is still in metric dimensions, but with sheet goods in imperial thickness.

Also important is that you can still use these plans if you have no/not enough systainers, the drawers in these designs can be used to fill all the systainer places as seen on the sketch below. 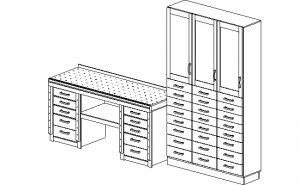 In the sketchup plans I also added 2d models of the workbench and cabinet where can can play around with the drawers or systainers of your choice and see how you can sort them out in the best way. There is one for the SYS-AZ and one for the homemade version. Below is an example of how the workbench cabinets can be sorted out with SYS-AZ drawers.